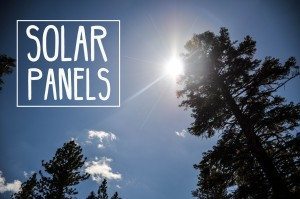 There are two kinds of solar panel systems, solar thermal and photovoltaic (PV). Each use solar panels to allow us to use solar energy. Solar energy is when a photon is absorbed and then turned into heat or electrical energy. Photons are light particles and trillions of them fill the Earth’s atmosphere. Photons are a great source of renewable energy. Although both solar thermal and PV panels allow us to use solar energy, they do it in different ways.

The solar thermal panels used in one Envirohaven™ location are created by Sunvelope and were uniquely designed by Auguste Lemaire. You can learn more about this design in this short video.

Auguste Lemaire  believes that “the greatest shower experience is taking a long hot shower in yesterday’s sun first thing in the morning.” You can see the two Sunvelope panels on the Haven™  in this photo.

When you want electricity think PV panels. Photovoltaic panels, or PV panels, absorb photons and turn them into electrical energy. Semiconductor crystals are used in the panels to yield specific properties that can be used in electrical circuits.There are three kinds of PV systems. Intertie, which work with the utility grid; standalone, which are off-grid systems that require batteries; and hybrid systems, which are both connected to the grid and have battery backup. In the intertie system, your homegrown power generator is connected into the public utility grid so you can sell back excess power. The Envirohaven™, near Lovelock is a standalone, off grid system.

The Haven™ design uses less electricity. Lower demand for electricity reduces the amount of solar panels needed, ultimately contributing to the creation of lower building and maintenance costs. With an increase on low-cost technologies solar energy has a sustainable future. Next time you’re looking at solar panels, take a minute to think about what they’re creating and what kind of solar panels would work best for you.

Envirohaven® provides Sustainable Housing Solutions for those that seek more comfortable and usable interior space, more energy efficiency, and more durability with fewer materials and less maintenance. The Haven™ home offers a perfect solution for those seeking a sustainable lifestyle in remote and rural locations.

HERS is your MPG when seeking a Sustainable Home

Envirohaven Nominated for Sustainable Design as Leader in Sustainability

We are committed to sustainable living and green homes. That's why we enjoy writing about the latest news and developments in green technology and green building. Subscribe below to receive notifications of new posts and to help further public awareness by contributing with your comments.

Get The Latest News!